Lady Gaga broke down in tears as she shared the Critics’ Choice Awards best actress prize with Glenn Close.

In the second tied result of the night, Gaga won the award for A Star Is Born while Close was recognised for The Wife.

An emotional Gaga revealed her mother and veteran actor Close are “good friends”, adding: “So I’m so very happy she won this this evening.” 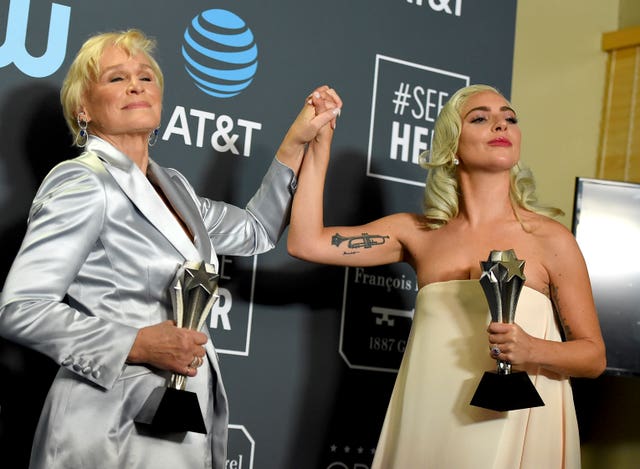 In A Star Is Born, Gaga plays an emerging pop star married to Bradley Cooper’s ageing rocker who is battling drink and drug addictions.

She said: “I wanted nothing more to show the truth and power of this very heartbreaking dynamic. The true star of the film is not me; it is bravery and it is perseverance.”

The actress and pop star also thanked first-time director Cooper for being a “magical filmmaker” and a “magical human being”.

She said: “I have never had an experience with a director or an actor like I had with you and I will cherish it forever. You seamlessly were both the love of my life and the man behind the camera.”

Close, 71, repeated her success from the Golden Globes, where she was also named best actress.

She said: “I think I can speak for all of the women in this room: We celebrate each other, and we are proud to be in this room together.”

Gaga also took home the best original song prize for Shallow, the hit track from A Star Is Born.

Earlier in the evening at the star-studded ceremony held at Santa Monica’s Barker Hangar, Amy Adams and Patricia Arquette shared the best actress in a limited series or movie made for television award.

Adams was recognised for Sharp Objects while Arquette won for Escape At Dannemora.

The Critics’ Choice Awards, handed out by the Broadcast Film Critics Association, were hosted by Taye Diggs.