Tom Cruise: My ankle is still broken but I have to keep going

Tom Cruise has said his ankle is “still broken” after injuring it last year on the set of the forthcoming Mission: Impossible film.

The actor recently resumed shooting for the film and said he must “keep going” despite the ankle not being fully healed because of a scheduled release date. 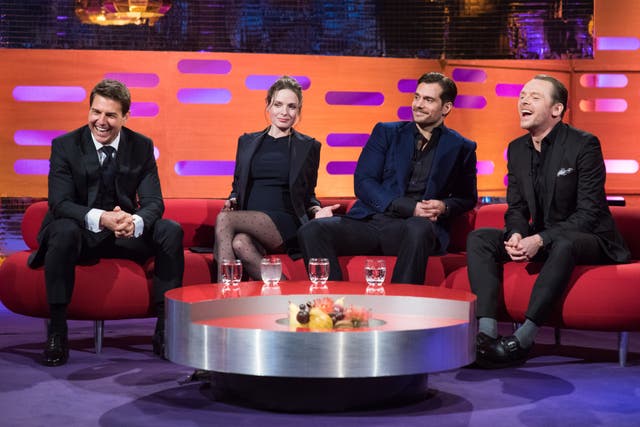 (left to right) Tom Cruise, Rebecca Ferguson, Henry Cavill and Simon Pegg during the filming of The Graham Norton Show at The London Studios (Matt Crossick/PA)

“It’s not fully healed but we are shooting and we have a release date so I just have to keep going.

“I spent eight to 10 hours a day, seven days a week in rehab because we still have some major stunts to do.”

Production on the sixth film of the action franchise was halted last year after Cruise broke his ankle while completing a stunt.

Sharing details about the accident, the 55-year-old told Graham Norton that it occurred while in pursuit of his co-star, Henry Cavill, who also appears on the chat show along with Cruise and their Mission: Impossible co-stars Rebecca Ferguson and Simon Pegg.

“I was chasing Henry and was meant to hit the side of the wall and pull myself over but the mistake was my foot hitting the wall,” Cruise says.

“I knew instantly my ankle was broken and I really didn’t want to do it again so just got up and carried on with the take.

“I said, ‘It’s broken. That’s a wrap. Take me to hospital’ and then everyone got on the phone and made their vacation arrangements.” 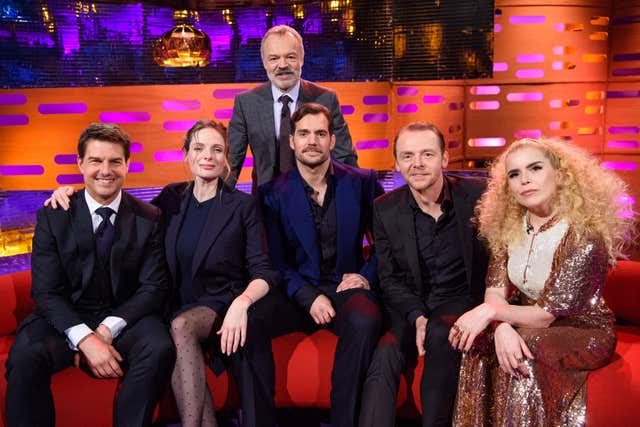 Ferguson, who is pregnant, revealed that she “made a baby in the break” from the film

“I thought I’d have at least six months off,” she adds.

Asked about whether she had to stop filming stunts, she said: “I still do as much as I can with a bump.”

Cruise says, of the sixth film’s title Fallout: “It takes into account all the previous Mission: Impossible plots and it’s the fallout of all the good things we did that are now being used against us.”

The Graham Norton Show, which also sees singer Paloma Faith perform in the studio, airs on BBC One on Friday at 10.35pm.